Started a new project because I needed something different and I wasn’t prepared to purchase new bits for the hulk till after Essence so I started in on this instead!

Step one: bra- this was a strapless 38C warner that I started with. I thought it had fit okay previously with some pads (made HERE) so I started in on the transformation! 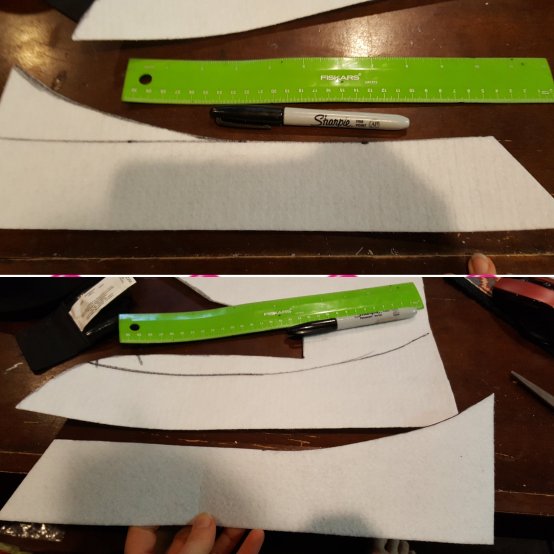 I went with a slightly wider band because I sometimes really like the look so I traced the actual band strap and went from there- I copied the strap that I had to the side to get band number 2 .

I then cut gross grain ribbon to reinforce the straps and tacked them down via machine.

After that I started attaching the brand to the bra and trimmed the side pieces off that I didn’t want.

Bottom picture you can see I repeated the process for the neck straps. Interfacing  and ribbon sewn together.

Once the straps and the bands were put together the next step is covering the the straps with the nude fabric.

And then I pinned and sewed it all together since placement seemed to be correct and I was generally happy with how it felt.

On the left is no padding and on the right has the padding in it. And that’s about this moment when I remembered how much I hated strapless bras and that this was a giant waste because I need a different bra- because the way this digs into the top of my breasts isn’t flattering. Upside- the straps are good so I’ll just take them off and transfer them to a new bra.

This was an unfortunate loss of time this week- but we’ll catch up- progress shall be made- and with no time to waste we moved on to the next bra! This is an existing old bra that I have that the elastic was kind of shot in so I had put it in the “to use” bin and now it was time. First step was looking at the shape and then removing the lace covering- once you cut the bra at all it curls back and it’s a general nuisance.  Trimmed the top point off (where the shoulder straps meet the cup) and then trimmed the edges off as well and you’re left with the bottom picture.

From there I wanted to give a little reinforcing so I trimmed some interfacing and stitched it down to the inside and then put some iron on stabilizer- just to see if that would help give the top edge of the cup the structure I wanted.

I repeated this on both sides and then put more fusing on the cup:

And that’s the bra cups.

The next important part is the center of the bra- which is the gore.  I personally really like the deep V shape you get when you trim out the inside of the cup and reinforce the underwire- so- that’s what I did! I sandwiched two layers of interfacing and stripes of grosgrain and then started to attach it and trim it down to a shape I liked.

I’m still debating adding a small horizontal strap underneath this just to keep the cups from splaying apart to far- but I’ll get to that in a little bit. 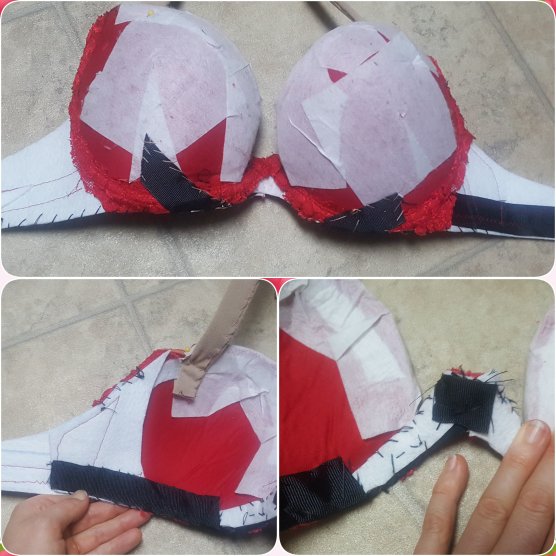 And that my friends- is how I deconstruct and reconstruct my bra’s to make them dance wear. This is not *the only* way- this just my way. As long as you bewbs are covered and you can truly dance without your costuming impeding you- then you’re doing alright.

This is what it looks like with the straps all in place.

And compared to the first iteration of the strapless bra:

I feel like I get a lot more lift and definition out of the second round than the first- that bra just cuts into my chest and I lose all semblance of chest definition- and since I have chest muscles- without the actual breast tissue defined- it’s not particularly flattering. Which makes the time I took to back track for the adjustment a HUGE WIN.

Stay tuned for the next post on covering your bra with your fashion fabric.