Welcome back fearless readers -we are going to take a break from the regularly scheduled Spring Fling status update to give you a single dose shot of this Gangsta Bewb Costume!

A little backstory for you: I was fortunate enough to attend a workshop here in NJ with the lovely Shahrzad who while originally from the Delaware area, now lives and works in Cairo going on 3 years now.  Of course she brought some costumes to sell which YAY ME- one of them almost fit and had some damage so I picked it up as a fun new project AND- one of those fantastic 2 piece costumes that I don’t usually wear or make that makes my life way easier at gigs (I keep telling myself that I will but- I haven’t)

This is a crazy neon green costume with an insanely long skirt and a neat detail on one hip for a really long leg open look (WIN) and a bra that is just- intense- and that’s really the best way to put it.

The major issues for me to get this wearable is the bra gore was broken and not stable, the cups were about 3x tew big, the skirt was about 8″ too long, some of the large stones were loose and required restitching, and then I needed to adjust the hooks and add a snap.  Which in the world of costuming isn’t too much work- WIN FOR ME.

Step one was going through and re-beading through beads and gems to secure any loose stones that had popped off. There were a few stones that were gone- I think 5 or 6 in total and while in the grand scheme of things not insanely noticeable- it was enough to warrent moving some things around.

I removed all the stones and beads on the end where the belt edge would cover it over in the overlap.  That gave me a few stones and more beads to play with- and I substituted some clear beads that were similar to the ones on the costume to stretch my stash a bit.  I used those to fill in the gaps- and when I ran out- I had enough of the silver lined stones to fill in the gaps and reduce the glaring holes.  WIN!

Next I went about fixing up the bra. I took some wire I had and bent it in half- then wrapped it in heavy duty thread- then doubled it again and folded it over the existing upside down V shape to give it some structure. It was vastly improved- I still think it needs to be a bit closer together and I’m likely going to add some fishing line to bring the cups a little closer together to get a little more lift out of the bra.

After that I went in on padding up the bra. I started with foam that I used two and sewed together- a larger one and then a smaller one to bolster. I then used batting on top to give a little more give for natural movement and a less forced “propped” up look. It’s almost there. I was able to use it in the dark restaurant but I’m not entirely convinced I can’t do better. Due to the teeth edge of the bra- it’s a little harder to get my breast tissue to fill out the top without a nipple peek. I may line the back with a nude fabric to hide some of this and help with the over all aesthetic. 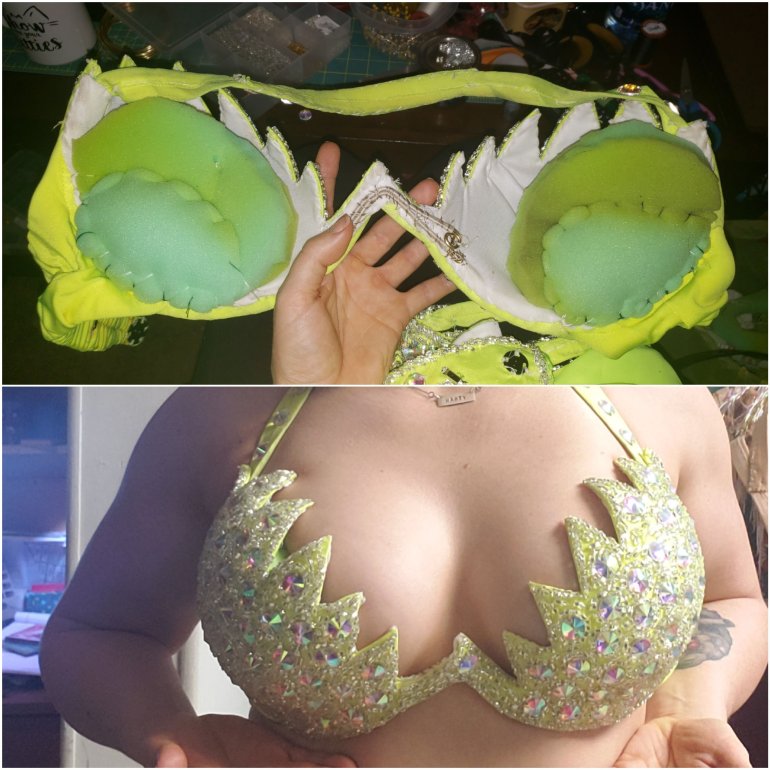 My first stab at hemming this I tried to take it in from the top- I flipped the skirt over the belt and just stitched it down about a 1/2 inch from the top then let the skirt fall back down effectively reducing the length by 5-6″ but honestly I hated what it did for the of the skirt coming from the belt. I wound up with half my butt cheek out on accident-

But it was wearable- and that was a win! I did a shorter set and had a great time twirling the skirt around like Samia Gamal but ultimately I’ll have to go back in and hem it from the bottom. There is more than enough fabric and length- if I hem it at 40″ I can wear my heels and it will still be okay AND it won’t lose a lot of the value just b/c I shortened it- very few dancers will be able to wear it at the current length. AND I won’t have to worry about my butt cheek out.  And my lovely partner person had a great idea to maybe create some cross straps- so I may use the left over fabric to create some chest details to help distract from the fact I’m wearing a bra at a minimum 3x tew big! but hem first- I’ll get to cup details later!

And that’s a wrap folks- when I make some more adjustments I’ll let you know how it works out and I’ll try to grab some more pictures. Thanks for joining me on this one off costume alteration.   Stay tuned for more Spring Fling costume posts!