Back to the drawing board! I bought some muslin to try to whip this up. and I think I’m going to free hand off my paper and then trace and see what happens- because – why not!!!
I hammered out some more pants this week for the Collective and really need to drill down on this whole vest situation-SO.MANY.THINGS!

Moving on to the vest- if you remember from the original draft HERE I had to widen and shorten the vest- so I took my existing mock up- marked where I wanted to see extensions and plopped the template down on the muslin, and did what I always do- free hand that shit and hoped for the best. 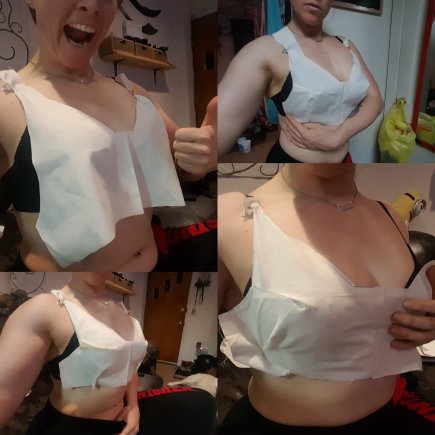 I figured out where I wanted my darts- and marked them out on the flat muslin- then copied them to the interfacing and cut them out.

And then I cut it out and sewed it together to get this rough looking shape.

From here we needed to actually cover it- I took the muslin mock up flat and put it on the canvas material and gave a generous easement to turn the edges. 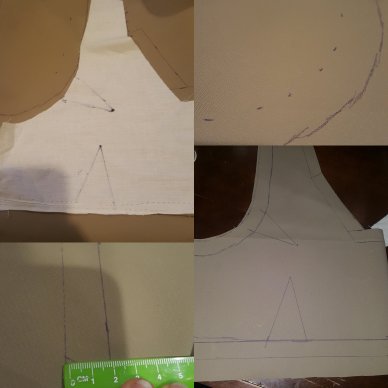 Turned the edges- pinned the darts and then used my handy dandy binder clips to get it all set up.

From there I moved to the back piece I made sure my foam armor was about the right size- there is something wonky about the alignment of the foam and after ten minutes of fussing I chalked it up to a dystopian world. I cut out the fabric around and sewed it down from the front to make sure it stayed very smooth on the front. Then I took a strip of the dark green and made some binding and clipped it down and then hand sewed it down to give the edge of the vest some pop.

From there I started playing with my accessories and what I had on hand and realized I couldn’t do an exact replica (that has been very clear to me for about 2 days- but you gotta do what you gotta do)- and opted to do something that just FELT like the right vest.

The back panel looks attached with a V shape over the shoulders and then has lacing form the outside of the center panels. So I took two straps of webbing and a buckle clip to create a similar feel as the actual vest.

It’s somewhere in the middle of the last step and this one I realized I was not particularly happy with what I have created- it’s not bad- but the colors of the fabric are totally wrong and it’s not making me really happy. being said- there is NOTHING to be done at this point but carry on and move forward. The decisions have been made- so we plow on- all the good bad and ugly incorporating!

I started making the front armor panels an realized it was starting to look A like teenage mutant ninja turtles, and also vaccun sealed chicken cutlets. So I drafted a peice for the front based on the space I had out of the thicker foam and instantly regretted it once I tried to cover it. #hotmessexpress

But that’s the way it goes- you try it- you see- and if you hate it -you try something else.

I went a different direction and chose to cut a piece of fabric out the exact shape I wanted then trace and sew that to the batting and avoid the foam. I stitched the batting down to the fabric, then sewed in a spiral to the center to compact it and keep it from looking like a vacuum packed peice of meat.

It was a much better endeavor. (Imho).

From there I needed to establish the side peices. I tried just cutting and shaping down but I really was struggling to get the right shape based the existing armor, the reality is while it’s a similar shape, we’ve changed the scale and surface area of the vest, so it will of course have to be adjusted.for reference–here’s the front of the vest again: 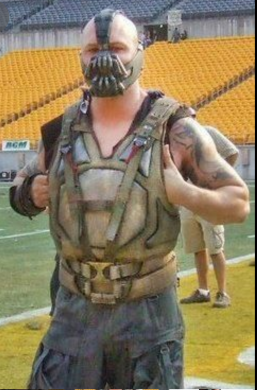 I tried two different shapes before I gave up for the night, and I think I’m going to go ahead start over with a fresh muslin peice to trim down a little better.

It definitely looked weird with the bewb area hanging out and the shape was wrong for a more fitted look. Sooooooo back to the muslin drawing board to cut out a fresh shape to fit. So cut new muslin pieces to fit and just sketched right on them. 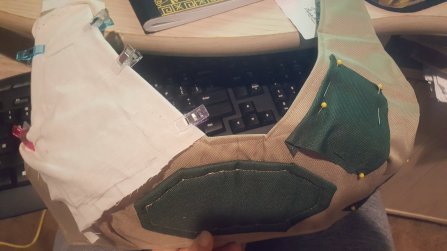 Once I got that shape sorted out, I repeated the process by cutting a flat piece of fabric, cutting out the batting, sewing it down trimming it up and stitching down the center to create a more solid shape.

And since I’m super behind for blogging because as you can see- my cat is holding my computer hostage we will cut it there- and I’ll have more for you next time- Till next time fearless costumers!