We’ve done it! We have officially come to the close of the costume.  I’m exceedingly proud- this makes two full costumes I’ve completed since roughly March of 2018.   If I finish a 3rd by December 2018- I’d be right proud of myself because that will include 6 pairs of pants and 6 double layer circle skirts for costumers- plus the ones for myself. So other than being absurdly sick- this wouldn’t have been finished for another 2 weeks minimum.  Thanks bronchitis?

Moving along to the good stuff!  Last you’d seen was the fringe for the bra- which you can catch in Thursday’s post , here. It took 2 full days to really complete the bra fringe and then sew it down- from there I just needed the center drop V section of fringe and then the glue on to finish the cups. (and obviously hooks and snaps but half of these were already on) I placed an order Wed for more materials because I knew I was low and upgraded the shipping- hoping it might be here by Saturday- bless my stars it arrived Friday mid morning. I was short the super tiny ones and large sew on crystals (for the center and necklace). I probably could have avoided ordering a full set of the mid size glue on ones- but here we are all restocked.

Knowing I was looking to use this for Saturday night- I started filling in the gaps for crystals and glue so it would have maximum drying time.  The left cup- and the shoulder straps needed to be completed. I had this idea/vision in my mind wanting to let the crystals be denser close to the cup and then thin out as they move up toward the top of the straps.  As my friend- said though with gluing “oh just one more- one more here- and one more here- it’ll be perfect” and two hours later you’ve covered the whole thing. It IS a distinct risk you face with this process. no lie. 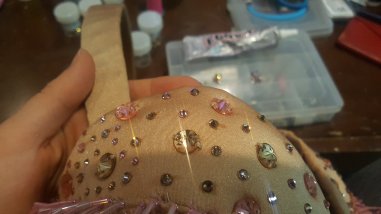 Not seen here was my new container of the tan/gold beads- I was pretty much down to about 50 mostly broken ones- and I still needed to complete that center section of fringe. So good thing those arrived!! But not knowing when the new beads would come in and fully stocked on the pink- I started in on the bra center to create a V section of the pink. I went ahead and chose to put both colors on the same ribbon rather than splitting the colors like the belt.  And these I didn’t bother to cover b/c I knew it was going behind the cup and no one would see it. (assuming I ever put a lining in- har har har) so I dug right into the pink. Once the pink was completed- I flipped it up and tucked it behind the elastic and started in on the tan. 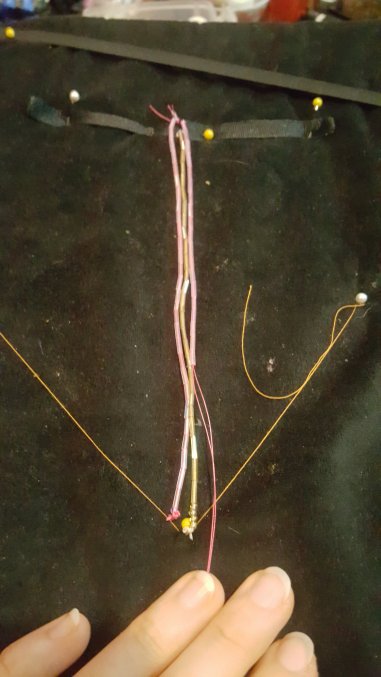 And to be completely honest with you all- at this point- I was so close to finishing this bad boy- I slowed WAY down on the “documentation” pictures so this post is going to be largely anticlimactic in terms of pictures.

To finish the bra fringe and apply the remaining crystals took me almost 5 days straight up. This close to the end of a project I was ruthless in my drive to finish it- despite my poor husband being here. He doesn’t generally like to sit with me while I sew because I can’t sew with good TV shows we want to watch on- they are admittedly bad so a lot of times he plays on his phone or just isn’t in the room at all. Plus- the random seizing coughing fits were also kind of a turn off.  I’m guessing uninterrupted all told I might have been able to work none stop on this costume for about 14 days and get it done? (with sleep and food). The considering the once side of the bra fringe took two days to complete- that’s 4 total for both sides- one for the middle one is already up to 5 days.  Yeah- I’m guessing if my back and shoulders held up I probably could have completed this in 14 days. But- I wouldn’t want to- my shoulders and back were quiet stiff after the 5 days I just spent full out on this. breaks are good. Breaks are needed. I didn’t even go to the gym at all because I was sick.  14 days might have been a bit much. Anyway I share only to share how much work goes in to these suckers. but good lord- the result is so worth it. (to me obviously)

I finished gluing and futzing with the fringe and the stones Saturday night (my gig fortunately/unfortunately cancelled)- had I had to get ready I would have stopped around 5 and then brought the whole thing with me to try to finish that center section of fringe. 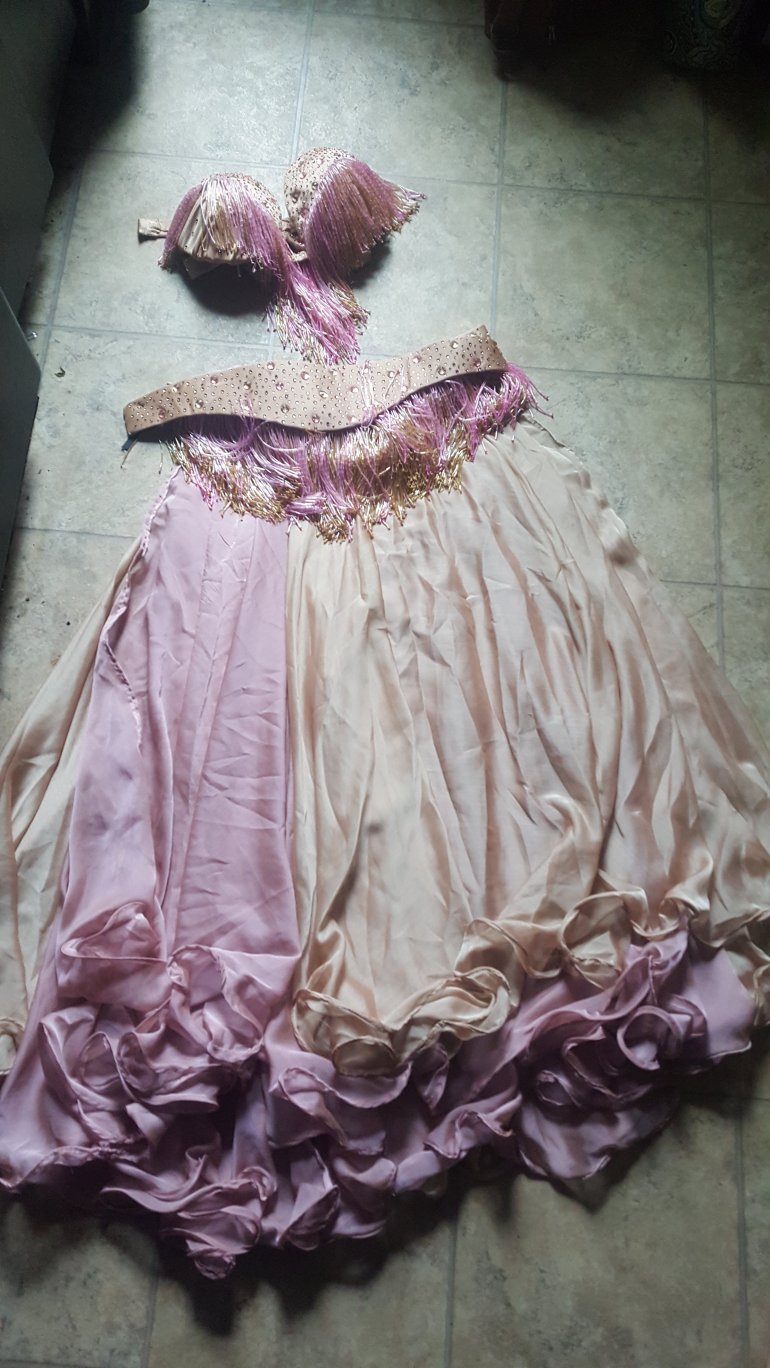 And because I happened to go doodling before I wrote this post- here’s a link to my a quick IG video!

New costume. New shimmies! Couldn't wait wait for official performance so I'm taking a cue from @cassandrafoxdance letting it all shimmy out in the new costume! *check my profile link for the blog on the wrap up and close up pictures! #bellydancer #thesweatylife#thesparklylife #doworkson #bellydancerproblems #bellydancersdoitbetter#thesparklylife #handmade #vintage #imadeathing #nekkid #legalldayeveryday #fringe #bringbackthefringe #drumsolo #raqssharqui

Thank you for reading and I look forward to seeing you next time!