Many moons ago- I remember saying I didn’t care for costume rehabs- they intimidated me. Starting from scratch seemed easier- and I was not having to “un-do” people’s work. But after I did two different rehabs- I realized it wasn’t that bad- and now I look to pick up well loved costumes that maybe I can breathe life back into one way or the other.

So with my fears well behind me- I picked this lovely fringey number up from Karma Karmalita for a dirt cheap knowing it was in need of love. I currently have no green costumes- and purchasing the fringe or materials alone would have cost me easily 5 times the amount- it’s well worth the investment to see what I can make happen with this.

To start with this costume already has some bead loss and thread damage-it probably needs a bath but I’m skipping it because I don’t know what will happen with it. When the post arrived- in my excitement, I opened the bag to examine it by holding it up and instantly heard the tragic sound of small beads hitting the floor all over. I gathered it back up and set it aside till I was ready to start- which was this week.  I took it out to take some “start” pictures: this is as I received it.

This is all I could get a picture of the beads- but trust- they went EVERWHERE!

I am currently working on a circle skirt order to fulfill so this will be a slow side project for the time being. But something I can drag along with me to events and my regular gig so I’m not sitting with nothing to do.

My first action would have been to be to remove the fringe sections and store it separately while I stripped everything off but I was able to establish fairly quickly that this is where all the lost beads were coming from on this costume. Not ideal- because that’s the advantage of buying beat up costumes is the hope to save the effort of doing fringe!

Establishing that- I moved forward. I started by removing the flat back sew on crystals. They were sewn to a felt back and had tiny crystals glued around it. They came off fairly easily and only a few spots of glue had stuck to the belt. 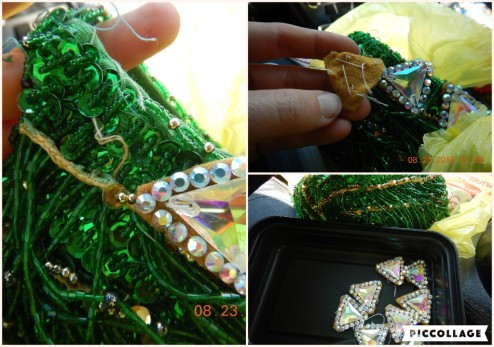 Once that was accomplished, I started removing the hex fringe beads and putting it in a container to restring.  This unfortunately changes things a little bit because I was hoping to not have to restring fringe. But it is what it is when you get an older used costume for a peanuts.  I got all the fringe removed from the bra and the belt within two hours and picked out as much of the floss thread as possible from the container of beads.

After about an hour of work- I had removed the fringe from the belt:

Next up is removing sequins and the seed beads and accent beads on top of what the fringe was sewn into. I started to pull most of the belt apart into piles of materials. it’s a slow process- this will probably take me a least a week or two if I’m being realistic with myself.

What I’m left with would be two different types of green beads: small green seed beads from the base and iridescent hex beads from the fringe, two types of plastic gold and then green and clear sequins- some rhinestone trim- and then the flat back triangular sew ons.  Most of the gold beads were plastic and had lost a lot of their luster so I am likely to throw those away since they just aren’t that attractive and if I’m going to rebuild fringe I’ll do it with nicer accent beads to extend the usability of the costume. Plus- I *think* I have some nice beads left over from somewhere that will make a nice accent and clear up my stash. I also have gold hex bugle beads left- maybe I should try to pull them into this. No-I don’t have enough of them. Disregard that thought.

The base fabric itself is nothing exceptional- it’s completely covered in sequins and beads so it didn’t need to be fancy.  My initial plan once I remove things is to find a complimentary color fabric that can stand for itself and create a nice negative space for my and won’t have to fill in all the space with sequins.  It’s a little time consuming to strip everything off of it- but that’s why I’m aiming to not do ALL of it- and try to create some space/breathe for it to move like this confetti one.

I’m not really looking to make something exactly like this- but this is one of my favorite costumes and it has served me well. But you seen see the possibilities of revamping into something similar- without having to replicate exactly.

And that’s all I have for you all today as we kick off this project.  I’m going to say the words out loud- that if I finish this by December- I’ll be REALLY impressed with myself. I have now TWO fairly larger projects lined up for before September- but we shall see- this will give me something to work on in my down time and at gigs.  I may wind up getting this started and letting it sit- so don’t get TOO excited about seeing regular posts right now! but never fear- we’ll get through it!

Hope you all had a great weekend! Till next time!